Perhaps it's been awhile since you've considered the dinosaur. After all, it's not as if they are out in your garden, nibbling on your new lettuce shoots; you're not wishing your neighbors would clean their coporlites off your lawn. Perhaps you prefer your wildlife to be a little more….relevant.

Well, in my house, we consider the dinosaur every day. You can't put your foot down in my living room without stepping on some prehistoric life form. Each afternoon at 5pm, all action stops (a miracle in itself) so that the 4-year-old, 3-year-old, and 21-month-old can watch the latest Dino Dan episode on Nick Jr. We are endlessly fascinated with the things that lived 150 million years ago.

So the excitement was palpable in the Siller house as we planned for our trip to the American Museum of Natural History to take in the World’s Largest Dinosaurs exhibit. The exhibit opened in April and runs through January of 2012. A separate ticket is required for this exhibit, in addition to the general admission ticket.

The World's Largest Dinosaurs: The Exhibit

This exhibit highlights the sauropods, a species of dinosaur that grew to be, well, huge. HUGE. But the paleontologists behind this exhibit have chosen to focus not just on size but on the biology of these titans as well. How did they grow so fast and so very big? How did they support that long neck? How did their heart, their lungs, their digestive system work to support such an enormous creature? The exhibit answers all of these questions and more.

The World's Largest Dinosaurs is, ironically, a small exhibit, spanning three rooms. It offers opportunities to touch and interact, and it demonstrates in many clever ways the difference in scale between the sauropods and any living thing that walks the earth today.

Now, I was traveling with a toddler and two preschoolers. They are all dinosaur enthusiasts, to say the least, but much of the biology was lost on them. I'm not sure they are even capable of understanding the significance of the difference in scale between the eggs of a modern day bird versus a sauropod (though I was surprised). But that is okay: There was plenty of WOW when they walked in and saw the Argentinosaurus head at ceiling height above them.

And when these three small children turned the corner and saw the Memenchasaurus, they were blown away. The Memenchasaurus is the centerpiece of the exhibit, not technically the biggest dino ever, but she takes up most of the room in this exhibit. She is a full scale model with the whole left side exposed to receive images from a projection screen suggesting what her insides might have looked like. Seats are arranged so that visitors can take in the show. We didn’t stop for this—this preschool power trio of mine doesn't stop for much—and it seemed tailored for older children and adults. So we headed out of the room and straight for the dig. I mean, to Paradise.

The final room of the exhibit is arranged with two large tables holding the equivalent of giant sandboxes. They are filled with a mix of sand and wax; casts of fossils are buried within for little paleontologists to dig out. The setup is designed to mimic an actual dig site in Wyoming, where a camarasaurus was once excavated. 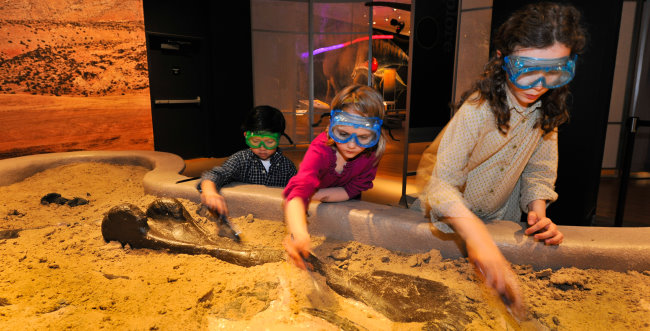 To participate in the dig, kids wait on fairly fast-moving line. At the entrance to the dig, they are provided a chisel, a brush and goggles (which have been sterilized, so no pinkeye worries). Then they go to it. There is no time limit; they may stay and dig as long as they like. However, the digging takes a little elbow grease, so they do tire out eventually. The younger children may stand on the stools provided to get a little leverage.

The dig was, no question, the highlight of the trip for us. My kids loved it and it was clear that the older children around them were enjoying themselves as well. Upon handing in their equipment, kids can receive a sticker to be placed in the information booklet given out at the entrance. That sticker has a secret code that, when punched into the AMNH website, leads to all sorts of avenues for the young paleontologist.

After the big dig, the exhibit exit leads to the (yikes!) gift shop and then filters out to the Saurischian Wing of the museum, where there are more dinosaurs to be found. After the ecstasy of the gift shop, my pre-schoolers were done, maxed out. But older kids and adults will still have a great deal more pre-history to take in while wandering around the fourth floor.

My family took in one other exhibit, the Hall of African Mammals (my 4-year-old's other favorite), and then we hit the food court. There is a lot more for adults and older kids with more stamina, but for us, after a relaxing PBJ in the food court, the visit—a good one—was done. Time to go home and play with the new plastic dinosaurs.

Suggested donation for entrance to the AMNH is: $16 adults, $12 students and seniors, $9 children. Exhibits are extra, and there are package deals where a guest pays one price only that includes all special exhibitions: Adults $32, students and seniors $24.50, and children $20. Or you can choose themuseum plus one exhibit: Adults $24, students/seniors $18, and children $14. If one chooses to pay less then the suggested price, but wants to see an exhibit, add on $20 for adults, $16.50 for student/seniors, and $11 children, for each exhibit.

In other words, this is not cheap, especially if you have a large family. It is special. So prepare your kids well, enjoy the exhibit, and then...

Keep it Going, and Keep them Growing!

Were the kids already dinosaur fanatics, or did this visit spark their interest? There are many ways to sustain their enthusiasm:

Next page: General Tips for Enjoying the American Museum of Natural History with Preschoolers

Anne Siller is a writer based in the Hudson Valley. In addition to writing for KidsOutAndAbout.com, she edits HyperKidsTravel.com, which helps parents of very active kids navigate travel both locally and far from home. Send comments or suggestions to AnneHSiller@hotmail.com.