Review of Disney on Ice: Treasure Trove | Kids Out and About Denver 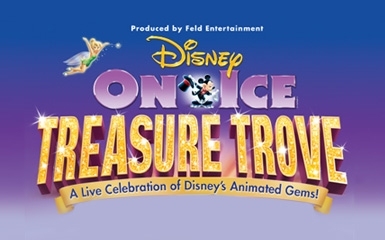 Get tangled up in Disney's 50th animated feature with Rapunzel and Flynn and enter the worlds of some of your other favorite Disney princesses such as Tiana, Jasmine, Ariel, and of course, the one who started it all, Snow White.

In the days before the opening of Disney on Ice: Treasure Trove, my 5-year-old ate, breathed, and slept with the expectation of princesses hanging in the air. If you're bringing a young daughter to the production, you probably are doing the same. So it's important to prepare your small Snow White that the "opening warm-up" section is NOT, in fact, princesses; it's The Incredibles (minus baby Jack-Jack), with lots of athletically dressed regular people, who encourage the audience to stand up and participate in exercises. It was fine, but I know that my 5-year-old was not the only girl in the audience turning to her parents and demanding, "But where are the princesses?"

Tick-Tock! Tick-Tock! Don't be late to a very important date...with Alice & the Mad Hatter as they march with the Queen of Hearts' Army of Cards!Okay, so it was not precisely a princess, but Alice is close enough, for all but the truly precise princess fans. The fleet of 20 cards in the Queen of Hearts' Army was both fun and impressive; their costumes were cards on both front and back, so whether skating forward or backwards, the skater always seems to be facing forward.

Peter Pan begins with a human skating on his belly in a huge crocodile costume, chasing Captain Hook, which thrilled both boys and girls in the audience (although it might require some reassurance and mommy lap-sitting for toddlers). This type of innovative costume design was used throughout all the stories in the show and was a definite enhancement to the flow and pageantry of each story being told. One of the highlights was Tinkerbell entering and exciting in flight as she sprinkled fairy dust over the ice to end the first half of the show at the 40-minute mark. My 8-year-old son would have loved this section especially; when we got home, he peppered us with questions about how they got Tinkerbell to fly. (I could almost regret not including my son in the experience, if it hadn't been such a special girls' night out.)

At the opening of the second half of Treasure Trove, we are transported to the Pridelands, where Mufasa meets a dramatic death. I mean do dramatic. It wasn't upsetting to my little one, but it should be noted that if your child has trouble with these kinds of scenes in movies/shows/books at home, you might want to take any appropriate precautions to make this part go smoothly for your child (maybe by coming back from intermission after this scene).

Immediately following the opening, our spirits are quickly lifted with Pumba and Timon singing "Hakuna Matata." Then came my 12-year-old's favorite couple's skate, Simba and Nolla. Throughout the show, the most spectacular, technically difficult skating is reserved for the pairs numbers. Simba and Nolla's jaw-dropping maneuvers in their couple's skate was the most breathtaking by far. Their gorgeous lifts, spins, and holds captured the attention and awe of even the adults in the audience.

The bottom line for the second half: less storytelling and more big hit numbers! Highlights were from Snow White, Aladdin, The Little Mermaid, Tangled, and The Princess and the Frog. This lent a faster pace to the performance and more toe tapping excitement, such as when Aladdin entered with a flash of fireworks and our favorite blue genie, and then a large, very lifelike elephant to be ridden by Aladdin himself.

Am I an incredible Disney sap, or did they just put on a fantastic show? I do believe it was some of both. This show is definitely more fun if you know the stories and can sing along. I have been to Disney World, and there is no question that this was liking stepping into Disney World—without, of course, the rides. The audience—old and young alike—is immersed in songs, characters, action and emotion. I'm so glad I had an excuse to experience it for myself! In my opinion, it was an affordable way for families to experience a piece of Disney magic without the big expensive trip to Disney itself.